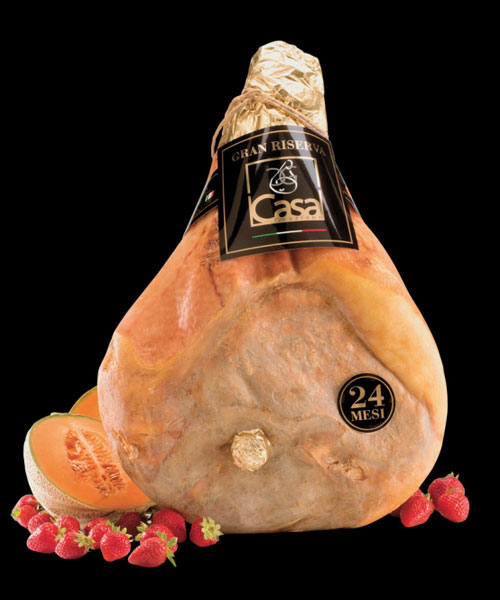 Producer: Casa Graziano
Denomination:
Prosciutto di Parma
Certificate:
D.O.P
Ingredients: Pork and salt
Size: about 10-11 Kg
Storage: about 12 months hanging in a cool place at a temperature of 17-20 ° C. Once cut, it can be stored in the refrigerator for about two months​
Area of Origin: Parma
Allergens: 100% free nitrites and nitrates added, gluten, lactose, allergens.
Nutritional declaration: per 100gr of product – energy value 1113kj / 267kcal

KNOW WHAT YOU ARE BUYING

Parma Noble Food has selected for its customers a  Whole Parma ham with bone seasoned for 24 months using salt as the only additive. Its typical pear-shaped form weighing nearly 10.5 kg, is made from the hams of pork raised exclusively in Italy. It is renowned all over the world and is distinguished by its nutritional properties and by the “crown”, the brand impressed only on original products. The month and year of seasoning are relief printed along with the acronym C.P.P. (Consorzio del Prosciutto di Parma) on the metal seal consisting of a round crown.

When cut into slices, ham has a colour between rose and red interspersed by the pure white of fat. A slice of ham must not be glossy but moist with a soft texture. Actual tasting starts with a careful olfactive test: the fragrance of a good ham must be sweet smelling, fine, harmonious, typical of seasoned meat. When tasted, the intensity of flavour must be sweet, slightly salty, fresh and harmonious.

KNOW WHAT YOU ARE EATING

Parma ham is a preserved meat. The quantity of sodium, total fat and calories vary considerably as the seasoning of the ham analysed varies. The peculiar characteristic of this sublime product is its high protein content (25.1%) that can reach 29.1% if the external fat is removed. Total lipids set at 18.3% as far as a whole Parma ham is concerned, and at 6.4% as far as defatted ham is concerned. It is recommended for its low fat content, content of free amino acids and highly digestible proteins.

It is best appreciated if eaten alone with butter, toasted bread and melon, fruity figs, exotic fruit thus tasting a unique and unparalleled dish. It may add personality to simple or elaborate dishes, from traditional or creative cooking. Wines pairing with Parma ham are either white or red, such as a fruity Lambrusco, a dry Malvasia, a Fortana from Parma and Piacenza hills, which perfectly pair with Parma ham. But it perfectly pairs with Italian as well as all local wines from all over the world.

The whole Parma ham must be kept in a fresh room not too dry, for example hanged in a cellar at a temperature of 17-20 Degrees centigrade. By taking this simple care, it can be preserved even for more than 12 months thus allowing it to continue its slow seasoning process. Once started, i.e. when the first slice is cut, it should be kept in a cold room preferably at a temperature not in excess of 8-10 Degrees centigrade by covering the cut side with a cotton tissue or with a film, and it is recommended that the product is used within a time frame of 8-10 weeks.

We use cookies on our website to give you the most relevant experience by remembering your preferences and repeat visits. By clicking “Accept All”, you consent to the use of ALL the cookies. However, you may visit "Cookie Settings" to provide a controlled consent.
Cookie SettingsReject AllAccept All
Manage consent

This website uses cookies to improve your experience while you navigate through the website. Out of these, the cookies that are categorized as necessary are stored on your browser as they are essential for the working of basic functionalities of the website. We also use third-party cookies that help us analyze and understand how you use this website. These cookies will be stored in your browser only with your consent. You also have the option to opt-out of these cookies. But opting out of some of these cookies may affect your browsing experience.
Advertisement
Advertisement cookies are used to provide visitors with relevant ads and marketing campaigns. These cookies track visitors across websites and collect information to provide customized ads.
Analytics
Analytical cookies are used to understand how visitors interact with the website. These cookies help provide information on metrics the number of visitors, bounce rate, traffic source, etc.
Functional
Functional cookies help to perform certain functionalities like sharing the content of the website on social media platforms, collect feedbacks, and other third-party features.
Necessary
Necessary cookies are absolutely essential for the website to function properly. These cookies ensure basic functionalities and security features of the website, anonymously.
Others
Other uncategorized cookies are those that are being analyzed and have not been classified into a category as yet.
Performance
Performance cookies are used to understand and analyze the key performance indexes of the website which helps in delivering a better user experience for the visitors.
SAVE & ACCEPT
Powered by